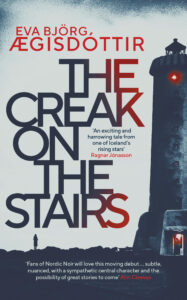 The first in the electrifying new Forbidden Iceland series, The Creak on the Stairs is an exquisitely written, claustrophobic and chillingly atmospheric debut thriller by one of Iceland’s most exciting new talents

When a body of a woman is discovered at a lighthouse in the Icelandic town of Akranes, it soon becomes clear that she’s no stranger to the area.

Chief Investigating Officer Elma, who has returned to Akranes following a failed relationship, and her collegues Sævar and Hörður, commence an uneasy investigation, which uncovers a shocking secret in the dead woman’s past that continues to reverberate in the present day …

But as Elma and her team make a series of discoveries, they bring to light a host of long-hidden crimes that shake the entire community. Sifting through the rubble of the townspeople’s shattered memories, they have to dodge increasingly serious threats, and find justice … before it’s too late.

I often wonder what Nordic noir has done for the tourist industry to that part of the world (ignoring the impact of Covid) since the TV dramas are all in shades of grey with bleak scenery, dismal weather, morose detectives and lots of loaded silences. Add the element of a killer on every street corner in town and in each remote village, and that’s more to put you off!

However, novels such as this one bring out the stark beauty of Scandinavia, in this case Iceland. I liked having a map and also an explanation of elements of the language and names that we need to know. It’s always nice to learn something new.

As you expects from this genre, there are layers to the story. We see both past and present events, and Elma, our central character with emotional baggage, is as much a subject of the novel as the murder mystery. There is social commentary too, so this really is an extremely complex and rich novel.

The writing in clear, concise language is understated in that there’s nothing graphic and no sensationalism. The plot moves steadily and menacingly towards the final denouement, when things shift up a gear.

The Creak on the Stair is a gripping, absorbing read. It’s the first in the series, and I’ve no doubt any subsequent books will be as polished and entertaining as this one. 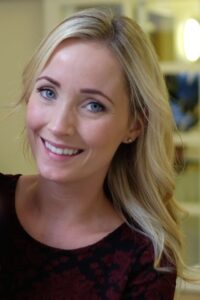 Born in Akranes in 1988, Eva moved to Trondheim, Norway to study my MSc in Globalisation when she was 25. After moving back home having completed her MSc, she knew it was time to start working on her novel. Eva has wanted to write books since she was 15 years old, having won a short story contest in Iceland. Eva worked as a stewardess to make ends meet while she wrote her first novel. The book went on to win the Blackbird Award and became an Icelandic bestseller. Eva now lives with her husband and three children in Reykjavík, staying at home with her youngest until she begins Kindergarten.

The paperback is priced £8.99 and published by Orenda Books