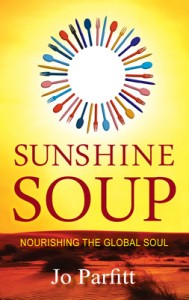 I’m delighted to host my first ever guest post. Jo Parfitt, expat author, has just released her latest book, Sunshine Soup which I’ll be reviewing in a few days’ time.

Jo has some inspiring advice for all would-be authors:

Many years ago I lived in France. I studied French at university and spent my year abroad as an assistante in a school in Normandy. I don’t know whether you know Neufchatel-en-Bray, but it’s pretty small. I was the only English girl of my age living there and I found it rather lonely. I love to eat and so that was how I whiled away the hours. I would wander up and down the high street, looking in the shop windows.   I particularly liked the patisserie.

One day, as I gazed at the tartes aux myrtilles and tartelettes au citron, the words French Tarts popped into my head. That would make a great book title, I thought.

Now, as I had told you, I was a bit bored and I loved to eat, so I hatched a plan. I would ask the people in the town to invite me to dinner and make me a tart and, in exchange, I would put their recipes in a book I was writing. I really believed this would happen, and so, it appeared, did my potential hosts. I got my recipes and solved my social life problem in one go.

Back in my dingy flat above the school boiler, I had no kitchen, in fact I could not even cook, but I was determined to write that book. After graduation, I did a little research and sent a synopsis to a publisher called Octopus. They accepted my proposal and about 18 months later, French Tarts was published in French and in English. I had never written anything before but this lucky break led me to believe that I could follow my dream and become a writer. Today, 25 years on, I have written 28 books, hundreds of articles, teach writing and am a publisher in my own right. I specialize in publishing books by and for people who live overseas.

Why am I telling you this? Well, because I believe that if you have a good idea, lots of passion and some self-belief, you too can achieve your dreams, even against the odds and even in a foreign country. My book succeeded because it was a good idea, with a catchy title, that came at the right time.

Without French Tarts I doubt I would have become the writer and publisher I am today. Neither would I be a decent cook. Living in France back then I would never have believed that I would go on to live abroad for the rest of my life. I have lived in Dubai, Oman, Norway and am now in the Netherlands.  I have become a pretty decent cook too, and wrote a second cookbook when I lived in Oman, called Dates.

This month I launch my first foray into fiction. Sunshine Soup is a novel about expats and expat life. Its protagonist is a cook and there are 20 recipes at the back of the book. French Tarts is no longer in print, though you can buy second hand copies on Amazon.

If you have a dream, however crazy, I urge you to go for it. You never know what may happen.

Jo Parfitt  – author of Sunshine Soup, nourishing the global soul. Out now. Price £8.47 and available on Amazon. Find out more at www.joparfitt.com, www.summertimepublishing.com and www.expatbookshop.com

This website uses cookies to improve your experience while you navigate through the website. Out of these, the cookies that are categorized as necessary are stored on your browser as they are essential for the working of basic functionalities of the website. We also use third-party cookies that help us analyze and understand how you use this website. These cookies will be stored in your browser only with your consent. You also have the option to opt-out of these cookies. But opting out of some of these cookies may affect your browsing experience.
Necessary Always Enabled

Performance cookies are used to understand and analyze the key performance indexes of the website which helps in delivering a better user experience for the visitors.

Analytical cookies are used to understand how visitors interact with the website. These cookies help provide information on metrics the number of visitors, bounce rate, traffic source, etc.

Advertisement cookies are used to provide visitors with relevant ads and marketing campaigns. These cookies track visitors across websites and collect information to provide customized ads.

Other uncategorized cookies are those that are being analyzed and have not been classified into a category as yet.