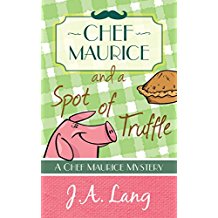 Chef Maurice and a Spot of Truffle by J.A. Lang is a very entertaining cozy mystery featuring Chef Maurice, whose large and very French moustache deserves its own postcode, and his friend and restaurant critic, Arthur Wordington-Smythe. It makes for a very appetising start to a series.
The scene is a small Cotswolds town of Beakley, which is lucky enough to have Maurice’s restaurant, Le Cochon Rouge, in it. I say ‘lucky’ because all the food he prepares sounds wonderful! Maurice is clearly extremely dedicated to his craft. So when Ollie, his fresh mushroom supplier, winds up dead this is not something our headstrong French chef will stand for. He immediately starts to investigate in his own somewhat eccentric way and makes miserable the lives of many of the locals, and especially that of PC Lucy. It’s not long before it seems that valuable and unusual English truffle are involved somewhere and so Maurice acquires Hamilton, a little pig with a lot of personality, from the local animal rescue centre. Hamilton’s sharp sense of smell in tracking down truffles comes in handy, but also gets him and his owner into trouble.
This is a quirky mystery with a clever plot and a host of larger-than-life characters. There’s a lot of very witty writing and it’s the sort of book that constantly has you chuckling as you read. It’s delightful and absorbing, and I for one will definitely be following the rest of Chef Maurice’s adventures.