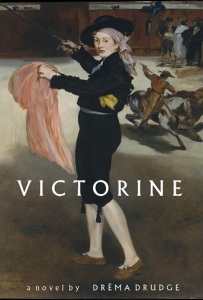 ‘Victorine, Drema Drudge’s debut novel, features Victorine Meurent, a forgotten, accomplished painter who posed nude for Edouard Manet’s most famous, controversial paintings such as Olympia and The Picnic in Paris, paintings heralded as the beginning of modern art. History has forgotten (until now) her paintings, despite the fact that she showed her work at the prestigious Paris Salon multiple times, even one year when her mentor, Manet’s, work was refused.
Her persistent desire in the novel is not to be a model anymore but to be a painter herself, despite being taken advantage of by those in the art world, something which causes her to turn, for a time, to every vice in the Paris underworld, leading her even into the catacombs.
In order to live authentically, she eventually finds the strength to flout the expectations of her parents, bourgeois society, and the dominant male artists (whom she knows personally) while never losing her capacity for affection, kindness, and loyalty. Possessing both the incisive mind of a critic and the intuitive and unconventional impulses of an artist, Victorine and her survival instincts are tested in 1870, when the Prussian army lays siege to Paris and rat becomes a culinary delicacy, and further tested when she inches towards art school while financial setbacks push her away from it. The same can be said when it comes to her and love, which becomes substituted, eventually, by art.

This book is a wonderful illustration of all that’s best about the historical fiction literary genre. It brings to vibrant, exciting life a period of history, namely the late nineteenth century and specifically in France, together with some of its very notable, creative people.
Victorine narrates the story to us, which gives us a fascinating insight into her mind as well as her life. She’s complex, ambitious, controversial, talented, beautiful, ahead of her time. She has to struggle to achieve anything in what is most definitely a man’s world and her energy and persistence despite many setbacks are laudable. She was further disadvantaged by not coming from a wealthy background. She had to battle every step of the way in her eventful life, and you can only admire her for that and be inspired.
To match the emotional rollercoaster that is Victorine is the vacillation between war and peace, between good times and bad in Paris against which the novel is set. The author has obviously done an immense amount of research into the period, the world of the artist and the persons she portrays. It’s detailed, compelling, but never overwhelming.
Victorine is a multifaceted, excellent book, equal parts absorbing, educational and inspirational.

Drema Drudge
suffers from Stendhal’s Syndrome,
the condition in which one becomes overwhelmed in the presence of great art.
She attended Spalding University’s MFA in Creative Writing Program
where she learned to transform that intensity into fiction.
Drema has been writing in one capacity or another since she was nine,
starting with terrible poems and graduating to melodramatic stories in junior high
that her classmates passed around literature class.
She and her husband, musician and writer Barry Drudge, live in Indiana
where they record their biweekly podcast, Writing All the Things, when not traveling.
Her first novel, Victorine, was literally written in six countries while she and her husband wandered the globe.
The pair have two grown children.
In addition to writing fiction, Drema has served as a writing coach, freelance writer, and educator.

For more about her writing, art, and travels,
please visit her website, and sign up for her newsletter to receive a free historical fiction story.

***
You can enter the global giveaway here
or on any other book blog participating in this tour.
Visit/Follow the participating blogs on Facebook/Twitter,
as listed in the entry form below, and win more entry points!

Tweeting about the giveaway everyday of the Tour
will give you 5 extra entries each time!
[just follow the directions on the entry-form]

CLICK ON THE BANNER TO READ MORE REVIEWS AND AN EXCERPT