The Awful Truth About The Herbert Quarry Affair

With a jangle of keys, a door opened. Herbert clanked in, his arms locked to his sides, his ankles shackled, his face a Hannibal Lecter mask. He was overjoyed to see me.

TV personality Marco Ocram is the world’s only self-penned character, writing his life in real time as you read it. Marco’s celebrity mentor, Herbert Quarry, grooms him to be the Jackson Pollock of literature, teaching him to splatter words on a page without thought or revision.

Now Marco must write himself into a crusade to clear his friend’s name. Typing the first words that come into his head, Marco unleashes a phantasmagorical catalogue of twists in his pursuit of justice, writing the world’s fastest-selling book to reveal the awful truth about the Herbert Quarry affair.

To say this book is quirky is an understatement, but it’s also unfair. Alongside this off-the-wallness, t’s packed with joyous anarchy, crazy characters, all sorts of humour from tongue in cheek to slapstick to sharply witty, a tantalising cosy mystery, and on top of everything it offers an unforgiving deconstruction of literary creation itself. It’s loosely inspired by the best-selling The Truth About the Harry Quebert Affair but, in my humble opinion, is altogether a far more enjoyable read.

Marco is one of our two central characters, Herbert, the man at the heart of this unfortunate sequence of events, being the other. Marco is the bumbling author attempting to write a book without any planning or even much thought at all, free or otherwise! He gamely plunges in and then on, first implicating his unlikely mentor Herbert Quarry in a murder and then attempting to clear him. But has our likeable incompetent bitten off more than he can chew?

There is so much more to the this intriguing and ingenious book than meets the eye. It’s impossible to do it justice in a paragraph or two, so the only thing I can recommend, very, very strongly indeed, is to read it for yourself and be thoroughly delighted and entertained.

Little is known of Marco Ocram’s earliest years. He was adopted at age nine, having been found abandoned in a Detroit shopping mall—a note taped to his anorak said the boy was threatening the sanity of his parents. Re-abandoned in the same mall a year later, with a similar note from his foster parents, he was homed with his current Bronx mom—a woman with no sanity left to threaten.

Ocram first gained public attention through his bold theories about a new fundamental particle—the Tao Muon—which he popularized in a best-selling book—The Tao Muon. He was introduced to the controversial literary theorist, Herbert Quarry, who coached Ocram in a radical new approach to fiction, in which the author must write without thinking—a technique to which Ocram was naturally suited. His crime memoir, The Awful Truth about the Herbert Quarry Affair, became the fastest selling book of all time, and made him a household name. It was translated into every known language—and at least three unknown ones—and made into an Oscar-winning film, a Pulitzer-winning play, a Tony-winning musical, and a Golden Joystick-winning computer game.

Ocram excelled at countless sports until a middle-ear problem permanently impaired his balance. He has yet to win a Nobel Prize, but his agent, Barney, has been placing strategic back-handers—announcements from Stockholm are expected soon. Unmarried, in spite of his Bronx mom’s tireless efforts, he still lives near his foster parents in New York. 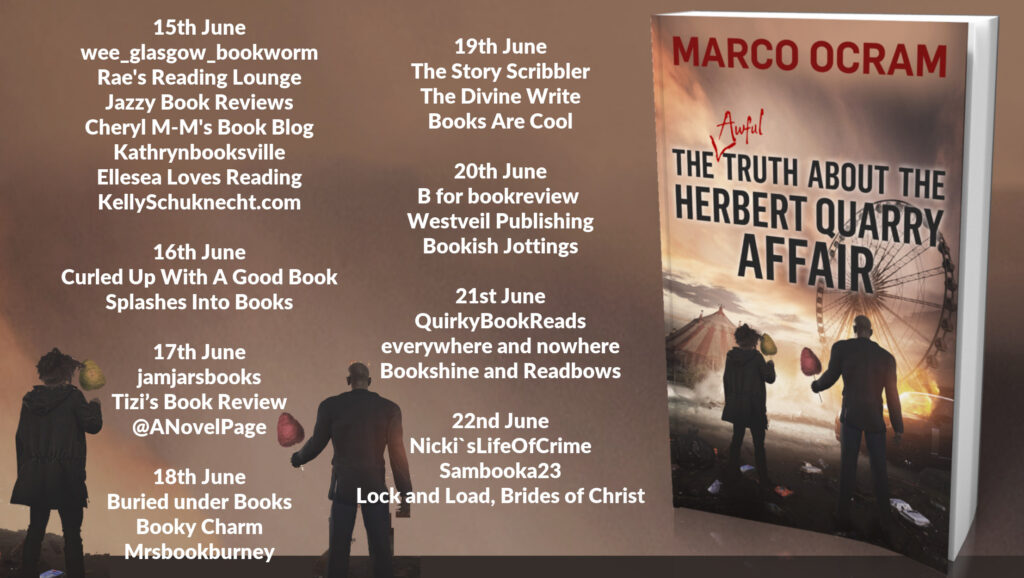