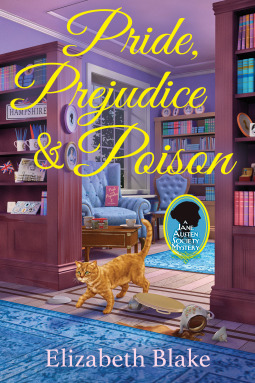 In this Austen-tatious debut, antiquarian bookstore proprietor Erin Coleridge uses her sense and sensibility to deduce who killed the president of the local Jane Austen Society.

Erin Coleridge’s used bookstore in Kirkbymoorside, North Yorkshire, England is a meeting place for the villagers and, in particular, for the local Jane Austen Society. At the Society’s monthly meeting, matters come to a head between the old guard and its young turks. After the meeting breaks for tea, persuasion gives way to murder—with extreme prejudice—when president Sylvia Pemberthy falls dead to the floor. Poisoned? Presumably…but by whom? And was Sylvia the only target?

Handsome—but shy—Detective Inspector Peter Hadley and charismatic Sergeant Rashid Jarral arrive at the scene. The long suspect list includes Sylvia’s lover Kurt Becker and his tightly wound wife Suzanne. Or, perhaps, the killer was Sylvia’s own cuckolded husband, Jerome. Among the many Society members who may have had her in their sights is dashing Jonathan Alder, who was heard having a royal battle of words with the late president the night before.

Then, when Jonathan Alder narrowly avoids becoming the next victim, Farnsworth (the town’s “cat lady”) persuades a seriously time-crunched Erin to help DI Hadley. But the killer is more devious than anyone imagines.

This is a very clever, understated cosy mystery. And I mean understated as a compliment in that, as with Jane Austen’s own books, everything is subtle and underplayed which just makes it all the more effective. For example, this book is gently humorous. It’s not a ‘laugh out loud’ type read, but more of a ‘frequent quiet smile’, which I actually prefer and which is harder to sustain since it doesn’t rely on slapstick or cheesy situations for comedy .

The characters are equally subtle. Their personalities gradually emerge as they book progresses, rather than being described in full to us at the beginning. We get strong hints as to what they’re like – Farnsworth is a cat lady and Sylvia is bossy, for example – but there’s a lot more to them than that and we watch them all develop nicely. Erin is an interesting heroine, very much a Jane Austen heroine in that she’s not the sort that’s cut out to play a lead role. She’s an intelligent, thoughtful woman who prefers the quiet life. She’s likeable and we enjoy following the events that unwind around her.

Interactions are great. As in any group of people, within the very dedicated Jane Austen Society there are friendships and animosities, organisers and followers-along, ambition and apathy. The bickering and niggling is extremely life-like – well, it is for me living in a small French village where committee meetings see the full gamut of emotions being run through!

The use of quotes from Austen’s novels is a witty touch. As always the author has a light hand with this and doesn’t overdo it, just throwing in an appropriate quote to add a little richness.

Well worth a read, whether you’re a Jane Austen fan or not.